LISAonthego LOVES, SUPPORTS, ENCOURAGES EMOTIONAL FREEDOM TECHNIQUES
"BE THE BEST YOU COULD BE"
LISAonthego EFT (Emotional Freedom Technique)
has effected and affected her life. It's an emotional version of acupuncture,
no needles & you could do it, anywhere, anytime.
LISAonthego  receives immediate results 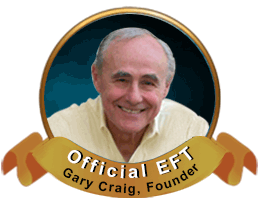 This is the Home for Official EFT™
(Emotional Freedom Techniques)

You have two choices

Where the authentic source for EFT (or "Tapping") resides

This is the home for EFT Tapping ... the source ... the place where the integrity of this popular, Universal Healing Aid (in use by millions) is maintained and improved with cutting-edge refinements.

What is EFT or Tapping?

EFT stands for Emotional Freedom Techniques (sometimes called Tapping) and, in essence, it is an emotional version of acupuncture, except we don't use needles.  Instead, we stimulate certain meridian points on the body by tapping on them with our fingertips.  This has shown repeatedly to reduce the conventional therapy process from months or years down to minutes, hours or a few sessions.  Visit The Free Gold Standard (Official) EFT Tapping Tutorial and learn this process from beginner's level on up ... at your own pace ... at whatever level you need.  Watch our EFT Intro Video above and then explore some of the options and astonishing successes in the materials below.

What can I use EFT for?

This innovative Tapping tool has proven useful in clinical settings for just about any emotional, physical or performance issue you can name.  That's a bold statement, I know but check out our free videos as well as thousands of articles written by therapists, physicians and clients on our EFT Tapping website.  There you will find EFT and Tapping success stories on everything from fears to trauma ... anger to depression ... bee stings to multiple sclerosis ... back pain to vision issues ... baseball to gymnastics ... singing to golf.  Please get the idea that this one innovative tool is so universal that one of our mottos is "Try Tapping on Everything."

I'm a beginner at EFT.  Where do I start?

The centerpiece of this website is The Free Gold Standard (Official) EFT Tapping Tutorial.  Go there.  It is the Gold Standard for all things Tapping and will take you from beginner's level as far as you want to go.  You can learn the EFT basics from one of our articles and stop there with a useful tool that will serve you for a lifetime.  If you wish to go further, just spend time with Parts I and II of the EFT Tutorial.  You will be taken step by step through the process at whatever pace works for you.  The EFT Tapping Tutorial includes written descriptions and rich videos that that bring EFT Tapping to life.

Don't want to invest time to learn EFT in detail but still want access to the more advanced Tapping benefits?  Then just familiarize yourself with the basics and go right to Easy EFT (Borrowing Benefits).  This clever process allows you to "tap along" with recorded video sessions that I conduct with others.  The benefits are often surprising.

I'm a professional.  How do I get trained and certified in EFT Tapping?

For a look at the options go to our EFT Certification page.

The Remarkable Evolution of EFT aka Tapping

Note:  The following represents my personal experience and contains my own beliefs and conclusions regarding EFT (or "Tapping").  It has not been approved by any medical or governmental authority.  Gary Craig

I have been in a perpetual state of astonishment since the early 1990s.

Why?  Because with one common sense EFT process I have been able to help people with a vast array of emotional, physical and performance problems.  All this without any meds, surgeries, radiation or long drawn out therapy processes.

In the beginning I learned that, without any credentials in psychology whatsoever, I could often provide more EFT Tapping benefits in one session than conventionally trained therapists could do in weeks, months or years.

And sometimes I could do this in minutes.

Further, I could teach the EFT Tapping process to others and they would get similar results.

I know this violates decades of ingrained beliefs.  Nonetheless, it is true.  That’s what happens when you think outside the box.

EFT Tapping for Phobias - a beginning

At first I thought the EFT process would just be useful for phobias as I marveled at how many phobics collapsed their lifelong fears in one short session.  Former phobics could look off the top of high buildings with complete calm.  They could touch snakes, drive across bridges, dive into water, fly on airplanes, etc. with no trace of their former fear.  I was delighted right out of my socks at how I was able to help these people with tapping.

Then I learned that I could use the same EFT Tapping process to help people overcome severe trauma.  So I applied EFT to war veterans and rape victims and achieved successes far beyond what conventional therapy was offering.  I mean the sting from these knee-wobbling memories would vanish … I mean GONE and the people couldn't get upset about the memory if they tried.  Many times they even laughed about the issue or talked about it like it was a walk through the park.  Eventually, I got so many positive reports from EFT students to easily conclude that the Tapping process was useful for ALL emotional issues.

Then people reported that pains and other physical symptoms improved with the process.  Headaches, including severe migraines, faded into nothingness.  Back pain, shoulder pain, knee pain and pains of every description often improved or flat out left.  Tremors, numbness and mobility would also improve and people would get out of wheelchairs.

I've had reports of recovery from terminal diseases via Tapping and improvements of “impossible” things that medicine couldn't touch.  I’m told of surgeries that have been avoided and drugs that are no longer necessary.  And the EFT list goes on.

Like I said, I have been perpetually astonished since the early 1990s.

My personal training prior to establishing EFT Tapping

What’s doubly interesting about all this EFT experience is that I have no formal training in the health fields whatsoever.  I have no licensing as a psychotherapist and no medical training … not even a beginner’s course in anatomy.

I am, however, a scientist by academic training (Stanford engineering degree, ’62) and am quite aware that new discoveries like EFT or Tapping are often advanced by people outside the field.  Our advantage, it seems, is that we are not persuaded by “the truths” that become accepted and thus encase the field in cerebral cement.

Comparing the EFT (or "Tapping") process with conventional methods

Who says psychotherapy has to take months and years to do very little?  Only those who believe it to be so and have invested their lifetimes in perpetuating that myth.

Who says that drugs, surgeries, radiation and the like represent the only viable solutions to physical problems?  Only those who have not adequately looked outside the box.  While the medical approach should certainly be considered for health concerns, it is not the only approach.  The emerging field of Mind-Body Medicine, for example, has developed numerous research studies pointing to relief in manners complementary to those of allopathic medicine.  Acupuncture has shown similar evidence.

EFT, in it’s simplest description, combines Mind-Body Medicine with the stimulation of the acupuncture meridians (via fingertip Tapping) to generate a synergistic blend of the two.  From my years of EFT observation it is easy to conclude that this blend gives rise to benefits that surpass those provided by the individual parts.  I’ve also seen it bring relief (including the complete cessation of symptoms) where drugs, surgery and other medical interventions appeared to have failed.

Does this mean that EFT Tapping is better than everything else and that all other methods should be dropped?  Of course not!!

Rather, it means that EFT represents a much different approach than other methods and belongs in everyone’s toolbox.  Tapping aims at the balancing of the body’s energy meridians and the resolution of health robbing negative emotions.  If one’s current healing path is ignoring this possibility then, in my opinion, their pursuit contains a gaping hole.

EFT’s acceptance has been monumental…

EFT often meets with resistance ... to be expected because the Tapping process doesn't fit with conventional thinking.

Along the way there was also some resistance.  This is to be expected with something as seemingly different as EFT.  We all want our beliefs to be correct and we will often defend them, sometimes with great energy.  When our beliefs are radically violated, our systems can even react with hostility.

While many people have greeted EFT’s healing benefits with love and gratitude, others have thrown stones at it.  What’s interesting is that the stone throwers tend to be scientists that should know better.  Rather than embrace this astounding method with intrigue and curiosity, they attack it WITHOUT EVER TAKING THE TIME TO UNDERSTAND OR EXPERIENCE THIS TAPPING PROCESS.  It is a fascinating study on how ingrained beliefs can be so hard to overturn (even when they are dead wrong).

So, as the years have gone by, we have gradually presented scientifically controlled studies designed to validate EFT’s effectiveness.  Little by little the hostility has faded.  It’s still there to some degree but, in my experience, what’s left always resides within people who are outside this palace looking in our window.  They have yet to seriously digest EFT and its remarkable benefits.  I welcome their industry and their criticism and ask only that the criticism be based on true experience with the Tapping process, not with speculative rhetoric.